A 43 year-old male was diagnosed with patellar tendinopathy. He has been experiencing anterior knee pain for 14 months, beginning insidiously, but probably linked to a period of strenuous running after a prior period of inactivity. His orthopaedic knee consultant had performed an MRI scan of the knee, and it was at this point that the diagnosis was confirmed, with tissue changes visible in the proximal portion of the patellar tendon. The patellar articular surface was preserved.

The knee had been resistant to rest and stretching, but had not been treated to-date with physiotherapy techniques. His orthopaedic knee consultant referred him to our clinic for physiotherapy assessment.  It was clear that the knee disorder was longstanding, with local oedema of the patellar tendon, insufficient (weak and slow) vastus medialis is function, poor ipsilateral hip strength and functional endurance, and poor proprioception in the limb, with some reduction in the medial arch height and function of the same foot.

The following exercises were prescribed (see below), and the tendon was treated with acupuncture dry-needling, ultrasound and also supported with Kinesiotape techniques. (see below). This gentleman has done well. He is symptom-free, and has returned to fell running.

Exercises after Hip and Knee Surgery

Pre-Op Exercises : How to Prepare for your Surgery

Exercises for Hip and Knee Conditions

Search our Site for Exercises

support us in our work 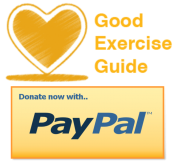